One of the great joys of being a leader in a large company is watching protégés achieve their career objectives, sometimes eclipsing the mentor in the process[1]. With talented engineers in particular, one of the waypoints on the journey to career advancement — the kind that comes with influence and credibility in the executive suite — is the dreaded Powerpoint presentation. Obligatory references to Tufte aside[2], Powerpoint itself is rarely the problem, but few tools are as effective as Powerpoint at facilitating — and sometimes even automating — the adoption of bad presentation habits. I should know, I've made practically every mistake in the book. When a colleague recently asked me to help prepare for an upcoming presentation, I summoned the memories of my own train wrecks and came up with six pitfalls that I have had to learn to avoid as I evolved my own approach:

In a previous post, I wrote of adopting a modified version of the "five sentences" mantra as a personal mnemonic for ensuring brevity in my written communications. A CTO peer and mentor once taught me a similar way of approaching presentations[3]. 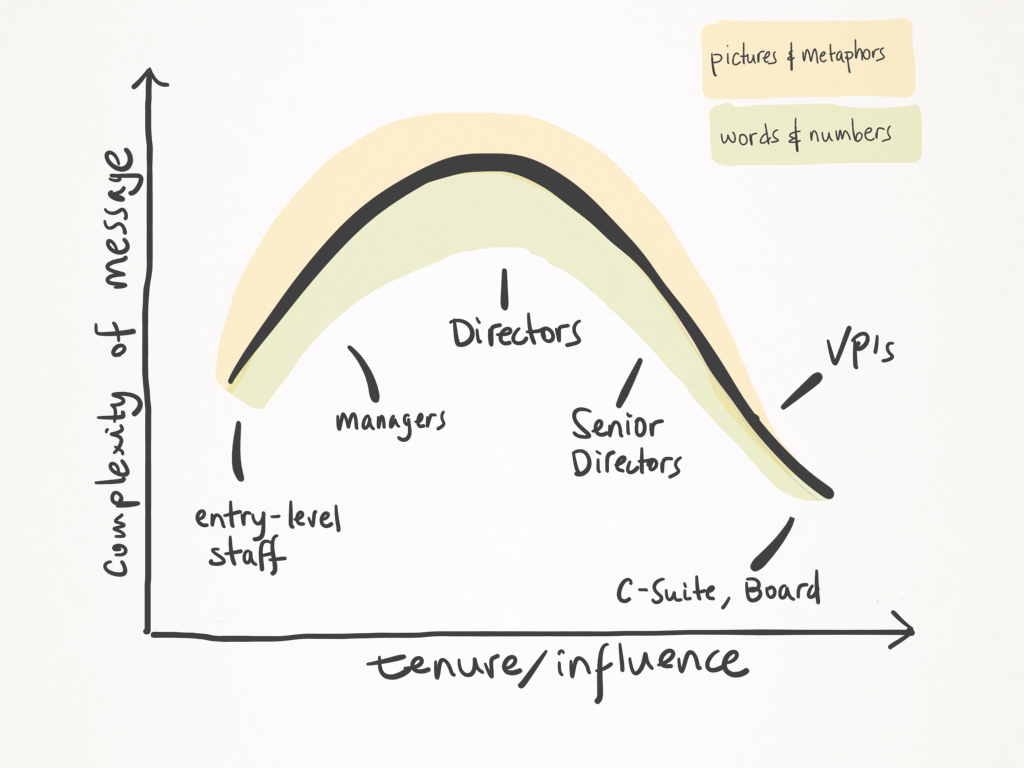 In his version, a presentation is measured by the volume of two elements: first, pictures and metaphors[4]; second, words and numbers. He taught me that, when approaching our senior-most leaders, both have to be minimized, with a strong bias towards completely eliminating the former. This is, itself, a variation on Guy Kawasaki's seminal 10-20-30 rule of powerpoint. In my own experience, while the 10[5] and the 20[6] have proven flexible given the situation (duration of a presentation isn't always in our control), the 30 — the admonition to set an uncomfortably large minimum font size for a presentation — is among the most transformative pieces of advice I've read[7]. An absurdly big font simply cannot support anything but the most economical, direct word choices available to deliver a message.

A different version of this is the "too much text" comment I used to receive periodically from my CIO when we would prepare for a senior staff visit. What he helped me recognize is that I am the message. If my slides said everything I was going to say, my presence was unnecessary; if my presentation could speak for itself, it was more appropriate for an asynchronous email brief. The reason I was being invited to speak to senior staff was that I was viewed as an expert, someone who would help my team handle ambiguity, someone who could answer unpredictable questions, someone who could enrich any conversation, not necessarily the one I was preparing to deliver. As an information security leader, the adjustment to writing headlines while speaking to their nuance was — and still is — a difficult one to make. We are conditioned to treat every email as a contract, to inject qualifiers into our verbal and written communication any time we discussed matters of risk, to operate in a world without absolutes, where nothing was black and white. Ironically, the senior staff presentation is, almost literally designed to be black and white. Which brings us to...

One of the easiest traps to fall into when creating a presentation is selecting the colors you use in your presentation... or not selecting them (which might be even worse). Odds are good that your company has a carefully selected color palette, and quite possibly a Powerpoint theme that includes it. Our executives are extraordinarily smart, and they will look for meaning in every detail we present to them. Color is no exception, and is a choice that is assumed to be significant. This means that, unless my colors are red/yellow/green intentionally to reflect the status of a project or task, I've learned to avoid the "standard colors" palette offered up by Powerpoint, lest I be asked the meaning of a particular color selection.

Below are two charts, each representing the breach cost data recently reported in a fascinating Fortune.com article[8]. The one on the left is using Powerpoint's default selections for how to display the graph. 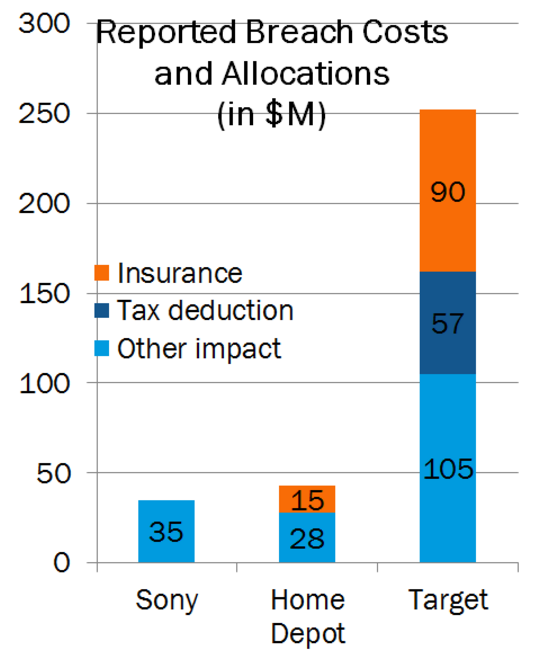 Color can signify "these things differ." 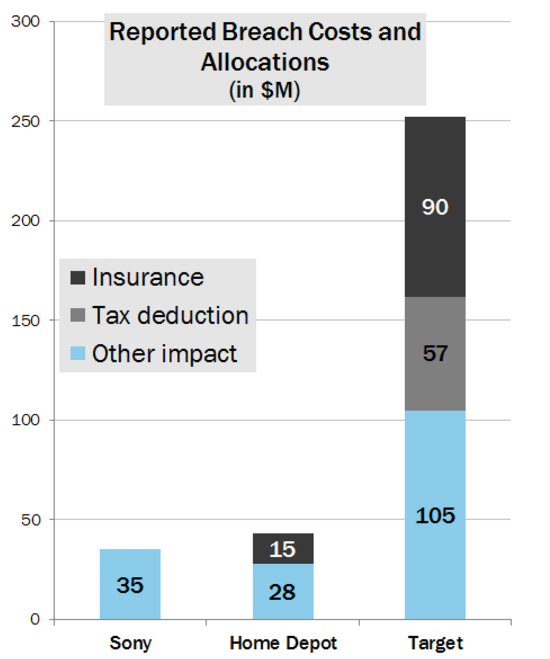 So can subtle contrast.

I made several alterations before using this as a visual to support my scheduled debrief to our company President. Some were clearly needed just to undo the poor choices made by Powerpoint, which seems oblivious to spacing of font versus bar width, distraction of gridlines overlapping with text elements, and contrast between black text on a dark blue background. 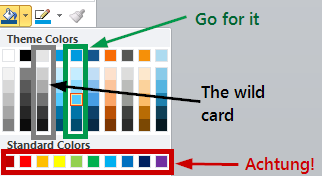 Most importantly, it is the oh-so-tempting rainbow of "standard" fill color options — one whose bright, seductive hues I admit I've succumbed to in many presentations — that I have learned over time to avoid as a potential derailer. Instead, picking a single color (preferably one that's already prominent in the company's logo and Office templates) and using shades of it, with greys used strategically as needed, has allowed me to focus on my message instead.[9]

Having gotten the volume of text down and avoided distraction in color schemes, 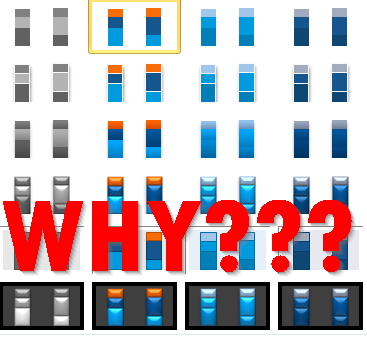 Powerpoint presents yet another tempting derailer to an effective presentation. Tufte, again, was pioneering in his recognition that one of the barriers to effectively conveying data with graphics is visual debris. In other words, the data-to-ink ratio needs to be high. Knowing this, the number of styling options provided by Powerpoint that make it all too easy to violate this basic principle is alarming. The bottom three rows, in particular, conjure up memories of the "before" graph in Dark Horse Analytics' data/ink manifesto[10].

The thing is, it is possible to swing the pendulum too far in the other direction. One lesson I've learned is that our executives will pre-read our materials, often printed copies. This means limited and judicious use of slides that animate — and ensuring that those which must animate will still print in a legible fashion. It also means that I cannot be the message if my audience is scratching their head, trying to make heads or tails of the data I just showed them. I encountered one such example in a presentation I received a few weeks back. 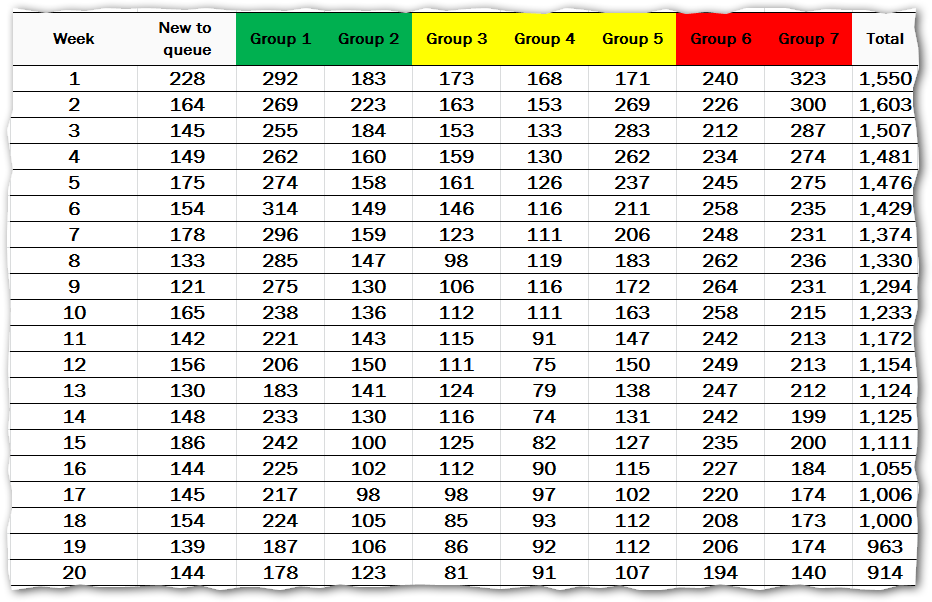 What, exactly, is happening here?

Yes, the data is definitely there. However, I — and several other executives in the room — immediately began splitting our attention between the speaker and our attempts to tease some meaningful trends out of the numbers we were viewing. Ignoring the fact that the "Total" column was actually calculated sans the "arrival rate," it was still too difficult to quantify what was happening other than an overall downward trend over time.

Had this been my data and my presentation, I would have taken a couple of opportunities to help my audience consume my information with less effort. One would have been to use color to signify something. In this case, that would have made the hot spots in arrival rate; the downward total trend; and the focus on groups 1, 6, and 7 clearer from the start. Another would have been to flip axes (people generally do better with time being on the X-axis than the Y-axis) and graph the trend: 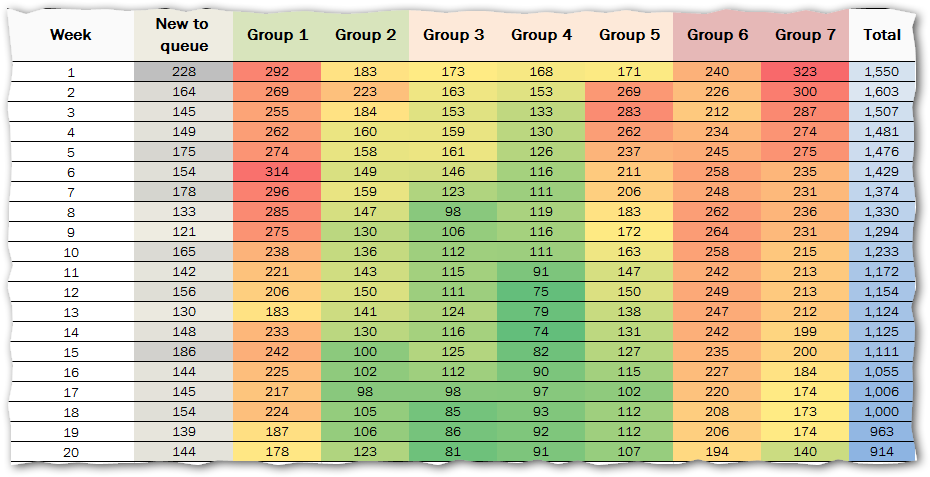 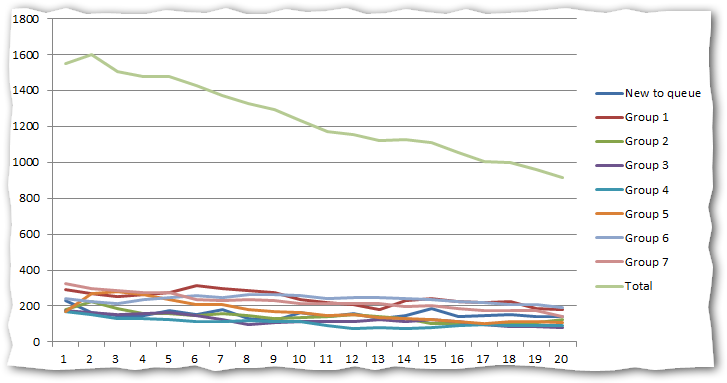 Alas, this is another case where Microsoft's defaults hinder rather than help the visualization. The overall trend is clearly down, but spotting the outlier — Group 6, rising briefly while all other indicators deflate — requires more squinting than some executives will tolerate. This is where Tufte comes to the rescue again[11]: sparklines! The ultimate in data:ink optimization, those handy little trend lines make it easy to zero in on each line's trajectory without overlapping or taking up significant visual space. 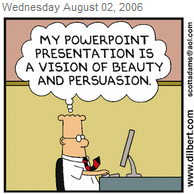 executive presentations. Powerpoint makes it oh-so-easy to create dozens of slides, and once you've committed to large fonts only, per the advice above, creating a deck with twenty or thirty slides can be tempting. This, in turn, can lead to a slippery slope of imbuing each slide with an artificial importance. Once created, a slide can feel like a child [12], a thing of beauty, something that requires an audience. More than likely, it's just a slide.

There are three things I routinely remind myself of when I find my decks growing long in page count. First, while my file size may be (practically) unlimited, my time is not; I want my executives to be highly engaged and ask many questions, so when my minutes-per-slide meter starts to dip below 5, I know it's time to redact. Second, I ask myself if there are words I'm going to say that are not going to be on the printed page; few things rack up negative presentation points the same way as "draining the deck" in front of senior leaders. Finally, and most importantly, the appendix is my friend. If I might need to talk to the content of a given slide, the appendix is a great place to keep it. This serves the additional benefit of being eco-friendly, as it is less customary to print the appendix as handouts. I once guided my team through a 2-hour strategy review with our CIO where we had three slides in the body and 90+ in the appendix. It did not go badly.[13]

I've learned in my songwriting hobby that I only have a few seconds to hook the audience. If I don't have a clever opening line, I'm taking a big risk with the performance. Similarly, because I plan to have a highly engaged audience in a presentation, I assume the questions I get may lead me down an unpredictable path, so I plan to deliver key messages early. Senior staff's time is valuable, and calendars are tight; there's no point building up to a crescendo that may never be played. I've given many presentations — and sat in on many others — where we never got past slide #2, either because of high engagement, or because of derailers and distractions that consumed the entire meeting time slot. Surprise endings are great for feature films[14], less so for executive briefings.

In the crescendo section above, I was deliberate in calling what I do "a performance." Over the years, I have had some rough outings and learned some painful lessons as a musician and an executive. The common thread running through those experiences was that I didn't rehearse, or I didn't rehearse enough. If I had, I would have noticed that I couldn't hit the right notes, that the cadence of a lyrical phrase didn't come out sounding as smooth vocally as it did on the written page. I still, to this day, prepare for senior staff in a manner that closely resembles the way I prepare for a show or a recital: I run through my material, out loud, with a stopwatch, and exercise my words and phrasing as though I am already in front of the CEO, CFO, CIO, etc. This is where it all comes together: do I have too much text? Am I draining my slides? Is my speech wooden and scripted or genuine and authentic[15]? Do my visuals support my hypothesis with minimal sidebars and explanation? Despite years of gathering evidence[16], the contrast between how I sound when I my voice is echoing in a room versus the eloquence that I ascribe to the same ideas in my mind still amazes me.

To truly give credit where it's due, I must acknowledge:
No results found
↑ ↓ Navigate up/down
Enter Go to article
Esc Close search